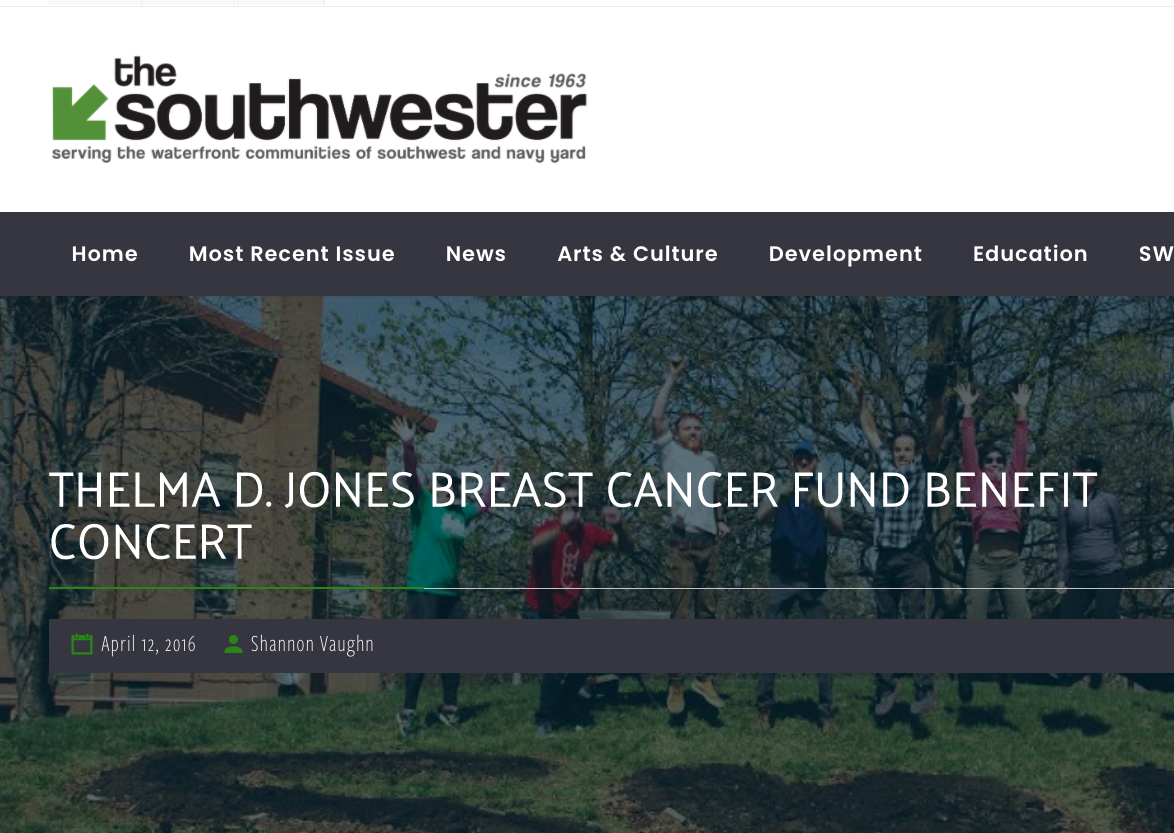 Link to The Southwester

The inaugural benefit concert for the Thelma D. Jones Breast Cancer Fund (TDJ BCF) held recently at Westminster Church achieved its goals and was a remarkable success. The benefit provided excellent entertainment, served delightful food, raised needed funds, and was lots of fun. Sponsored by Safeway, Blind Whino Southwest Arts Club, Black Benefactors, World ATM Company, Dr. Ione D. Vargus, Family Reunion Institute, Temple University, Edith P. Wright Breast Cancer Foundation, and an anonymous donor, a key caveat to the event’s success was inspired by sponsors such as Safeway, Blind Whino, and others who donated tickets to breast cancer survivors and residents in the historically underserved areas of the community. Lavern Jackson Chatman, philanthropist, former president and CEO of the Northern VA Urban League and former Southwest Neighborhood Assembly (SWNA) board member, skillfully emceed the program with precision and humor. DC Councilmember Charles Allen (Ward 6) delivered greetings, noting his long-time working relationship with founder Jones and referring to her as not just an activist or advocate but “a friend.” In a profound way, guest speaker Lori L. Wilson, M.D., FACS, a surgical oncologist/surgeon at Howard University Hospital and College of Medicine shared her breast cancer journey and what it meant to be both an oncologist and a breast cancer survivor. The audience welcomed Dr. Wilson’s passionate words of wisdom and message of hope in finding a cure so that no other woman or man has to hear the dreadful words: “You have breast cancer!”

As emcee Chatman moved the flow of the evening to a different beat, baritone Dick Smith, who is coordinator of Jazz Night in DC at Westminster Church, serenaded guests with a couple of his favorite tunes. Then, the event was lifted to another high when Cecily, acoustic pop soul vocalist, songwriter, and featured performer, delighted the audience with her soothing soprano lyrics mostly from her recently released self-titled debut EP. Her stunning performance displayed emotion in each of her tunes that not only captivated her audience, but also inspired rounds of applause. Cecily, one of Southwest’s rising stars, had returned to her community for a worthy cause and surprised the audience by donating one half of her album sales that evening to the TDJBCF. Her generous onsite donation of $200 spoke volumes about her commitment to the cause. Supplementing her unique style was special guest saxophonist Ben Sands, award-winning and veteran music director at Calvin Coolidge High School. Sands, a former long-time Southwest resident, received one of the community’s first scholarship awards and was performing in appreciation of the community’s gift, something he continues to do regularly with gratitude.

Prior to the start and end of the program, a delightful reception was enjoyed while guests grooved to the sounds of Saleem Waters from his newly released CD entitled “I’ve Never Seen Tomorrow,” which he dedicated to the memory of his sister Denise, who lost her battle with colon cancer in 2014.

After all was said and done, emcee Chatman insisted that Jones give some brief closing remarks. Jones graciously thanked the audience and her sponsors and supporters, and shared her compassion and reason for being not only a community activist, but also a breast cancer advocate as well, noting that she turned her breast cancer challenge into an opportunity to help others, a legacy passed on to Jones by her late parents. “No one should have to walk this journey alone,” she noted with her voice cracking.

Special thanks to a host of volunteers and supporters, including Southwest resident and honorary chair Carla D. Williams, Ph.D., who is the director of the Howard University Cancer Center; Vyllorya Evans, who was the onsite coordinator; Chef Michael DuBose; Wendy Johnson, TDJBCF volunteer; Anthia Peters; SWNA Vice President and The Southwester Distribution Manager Perry Klein; the American Cancer Society Cancer Action Network; The Design Experience; photographer Willie Spearmon; Rev. Brian Hamilton and the Westminster Church family; and Reba Pittman Walker and composer and vocalist Olayimika Cole, who together generously donated seven door prizes. Cole, who is chairman of the board for WPFW-89.3 FM, also helped to promote the event on social media and donated four of her debut CDs entitled “L’Ife.” In addition, a special thanks to Southwest resident Elaine Graves who purchased four of Cecily’s CDs and immediately donated them for future door prizes at the monthly TDJ Breast Cancer Support Group (TDJBCSG), the signature program of the TDJBCF. Graves, who has been a staunch supporter and frequent attendee since the group’s inception, introduced the support group to other Southwest survivors and neighbors.

Founded in September 2012 on the occasion of Jones’ 60th Birthday, the TDJBCF is a grassroots organization whose mission to advocate and improve the overall health and wellness for women and men through outreach, education, prevention, and early detection strategies on breast health and complementary therapy to reduce the incidences and mortality rates of breast cancer. The fund’s vision is to save lives, as well as embrace and achieve a world community free of breast cancer. Since April 2010, the fund’s signature breast cancer support group, has met monthly at the SWNA-ANC Office on 4th St. SW as a safe and secure place for breast cancer survivors to discuss and share their journeys. The group welcomes a range of highly skilled and well-known speakers, and adds support and comfort while giving a voice to those who are struggling with their diagnosis. In addition, the TDJBCSG regularly collaborates with major local and international organizations such as the GW Mammovan/Safeway, World Bank Group, Black Benefactors, Howard University Cancer Center, Community Wellness Alliance, DC Department of Health, GW Cancer Institute, Georgetown Lombardi Cancer Center and its affiliate Capital Breast Care Center, Komen for the Cure, American Cancer Society (ACS), ACS CAN, Smith Center for Healing and the Arts, Greater Mt. Calvary Church, Sisters’ Network (DC), Supporting our Sisters International, Inc., Edith P. Wright Breast Cancer Foundation, House of Ruth, Natalie Williams Breast Care Foundation, and the National Congress of Black Women, among a host of others. Donations to the TDJBCF can still be made online at www.eventbrite.com/e/thelma-d-jones-breast-cancer-fund-benefit-concert-tickets-19679079657 until Tuesday, April 18, at 11:59 p.m. The “donate” button is located near the bottom right. Afterward, contributions may be mailed payable to the Southwest Renaissance Development Corporation, the fiduciary agent for the TDJBCF, to Attention: Thelma D. Jones, 400 I St. SW, Washington, DC 20024. For more information about the fund or to become a volunteer, please send an email to info@tdjbreastcancerfund.org or call (202) 251-1639. Your donations will help with breast health outreach, education, prevention with an ultimate goal of reducing the incidences of breast cancer and saving lives! 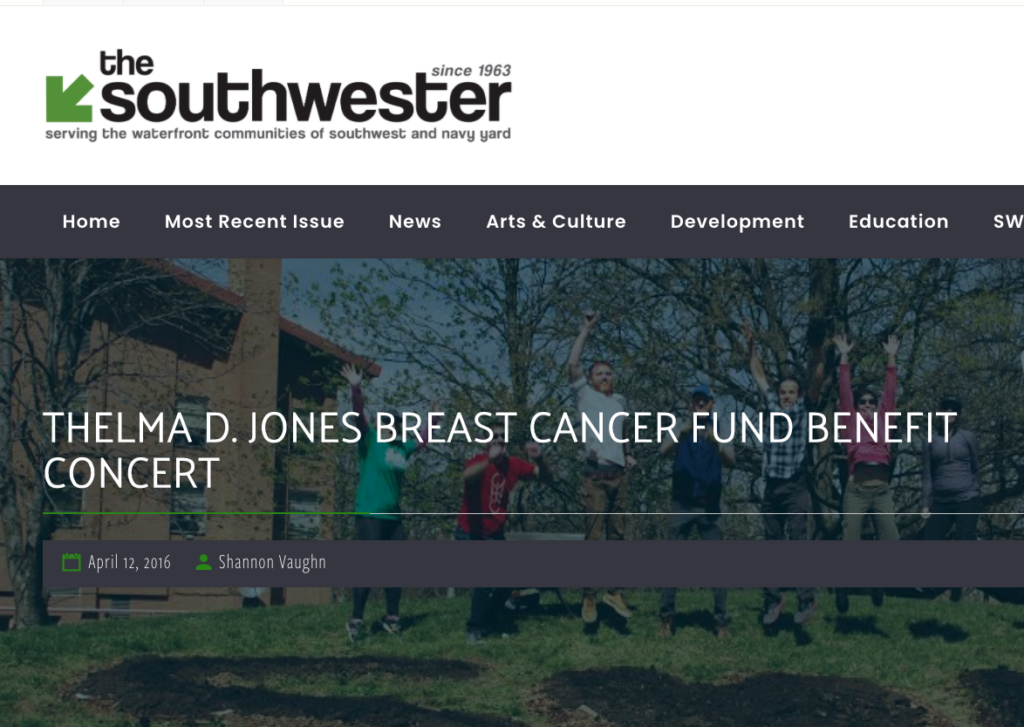