Thelma D. Jones’ work has been fundamental to civic and youth activism and raising awareness of breast health. She is an award-winning community activist, breast cancer survivor, advocate and founder and board chair of the Thelma D. Jones Breast Cancer Fund. Diagnosed in 2007 with a rare (unknown primary) and aggressive form of breast cancer (HER2+), her treatment regimen included chemotherapy, surgery (lumpectomy) and radiation. Jones is a seasoned volunteer with the American Cancer Society (ACS) and the American Cancer Society Cancer Action Network (ACSCAN).  In the former capacity she has spoken both locally and nationally, delivering the message of early detection, prevention, treatment and hope to thousands of women, men and young girls. As the recently retired DC State Lead Ambassador for ACSCAN, Jones has lobbied both national and local public officials for funding of tobacco control and cancer research. In April 2010, she established the Thelma D. Jones Breast Cancer Fund Support Group, the signature program of the Thelma D. Jones Breast Cancer Fund in Southwest DC. Focusing primarily on the historically less served communities, the support group has contributed significantly to providing a safe and secure place for emotional support for breast cancer survivors and caretakers to discuss and share their journeys, hear a range of highly skilled acquire information and resources, and give voices to those who are struggling in silence with their diagnosis.

Prior to becoming a cancer advocate, Jones retired from the World Bank Group after more than 33 years. As one of the principal founders of the World Bank’s institutional outreach program, Jones served as a community outreach coordinator, carrying out the Bank’s global poverty mission on a local level in the areas of education, volunteer management, homelessness, training and summer employment for youth, and community development.

Recognized for her long-time civic activism and advocacy, Jones has been featured extensively in the media where she speaks candidly about her cancer journey and her desire to turn her challenge into an opportunity to help others. She is the recipient of numerous awards and recognitions, including the Mayor’s Award for Community Service in the Category of Lifetime Achievement and the prestigious White House Champion of Change Award. In June 2016, Jones was selected by ACSCAN to represent the organization at the White House’s Moonshot Summit, and in Septembers, she was recognized with the 2016 State Lead Ambassador of the Year Award by ACSCAN.

Jones holds an AAS Degree from Durham College, Durham, NC and is a graduate of Georgetown University Nonprofit Management Executive Certificate program, George Washington University DC Neighborhood College and Leadership Greater Washington 00’. She is also a graduate of the National Breast Cancer Coalition Project LEAD and Wesley Theological Seminary Heal the Sick Program. In addition, Jones is a founding member of both Black Benefactors, a giving circle, and Black Philanthropic Alliance, a membership organization.  Since 1982, she has served on the board of the Southwest Neighborhood Assembly (SWNA) where she holds several leadership positions, including contributing writer for The Southwester, chair of both the Youth Activities Task Force and the History Task Force Black History Subcommittee, and co-chair of the Emergency Preparedness Task Force.

Grounded in her faith, Jones is a long-time member of St. Augustine’s Episcopal Church on the Southwest Waterfront. She serves as a lay reader, member of the Altar Guild, and member of the executive team to organize annual events on Justice Thurgood Marshall, a former member of the church.

Jones has one son, Jamal, grandson, Seneca, 8, and Ozzie, her eleven-year-old Shih Tzu. She enjoys reading, traveling, attending Jazz events, working with youth, and being a coordinating nexus of positive events. 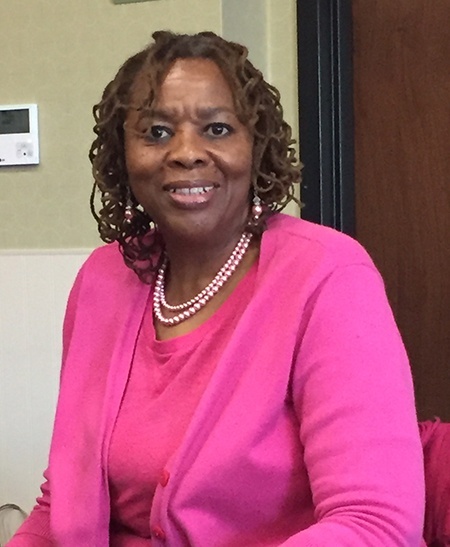